British Bishop Talks Out of Both Sides of His Mouth at Once - No surprises There Then.

Archbishop Peter Smith of Southwark has clarified that a plea by the bishops for the rights of Catholics in polygamous civil unions should not be interpreted as a shift in the Church's position on the subject.

Archbishop Smith's intervention came after a bishops' conference statement was taken as being an endorsement of polygamous civil unions.

The bishops' statement, a submission to a government consultation, said existing polygamous civil unions should not be abolished or merged into polygamous marriages.

The statement was signed by Archbishop Smith, the bishops' chairman of the department for Christian Responsibility and Citizenship.

Archbishop Smith said that the statement "should not be misinterpreted as a wider commentary on polygamous civil unions in general".

There you have it: I bet you are all dead clear now on what the Church teaches about polygamous "marriages". The above is of course a spoof, what the bishop was really talking about was two men addicted to the unhealthy, unnatural depravity of using one another's lower bowel as a sex organ being given some sort of legal recognition. It is apparently now part of Christian Responsibility and Citizenship to assist those committed to a life of grave sin on their way to hell. Apparently, the idea that Christian Responsibility involved calling those so committed to repentance went down the tubes with Vat2. How about the rights of necrophiliacs to keep a licensed corpse in their house, or the rights of coprophiliacs to have access to the sewers? Why is it that only some sexual deviants have rights - our lefty bishops are not that inclusive it turns out after all?
Posted by grahammoorhouse at 21:20 No comments: Links to this post

To Believe a Lie

Written by  Susan Claire Potts
Ideo mittit illis Deus operationem erroris ut credant mendacio
There is a shadow over the world. It darkens societies and snuffs the candles in the sanctuary. It creeps around corners and billows over houses. Good people see it, but they don’t know what to do. How do you fight a shadow?  How do you crush a phantasm? There’s no substance there, nothing to push or shove. Nothing works.
So what is this strange amorphous thing, this Mystery of Iniquity? How can we understand it?
Sometimes, the most complex, inexplicable things are not so hard to understand once the blinders are off. I’m a counseling psychologist—no theologian or scientist—but, like all who hold the Catholic Faith, I have eyes to see. After nearly forty years of studying the human mind, analyzing the root of emotional conflict, moral perversions, and intellectual error, this is how it looks to me:
Quite simply, the darkness is the result of a thought process disorder. Masquerading as philosophy and science, the disorientation has spread through the Church from top to bottom, corrupting minds and shaking the intellectual and philosophical foundations of Western civilization.
A new religion has the world in its grip.
The closest thing to it was the fourth-century Arian crisis, when the whole world groaned and found itself Arian. But at least then people knew what the argument was. The point of debate was clear. It was one thing or the other: Was Christ the co-eternal Son of the Father or not?
But this Shadow is more than heresy. It is the reinterpretation of Truth—which is no interpretation at all, but a denial and repudiation. People say it is Modernism, but horrid as that synthesis of all heresies, is, the nebulous New Religion is worse because it’s not a heresy. Rather, it is systemic apostasy, a total renunciation of the Deposit of Faith, a “standing off” from Revelation. It is the substitution of a lie for the Truth. Like all evil things, it has no life of its own, but it has attached itself like a blood-sucking leech to the Mystical Body of Christ.
MORE
Posted by grahammoorhouse at 16:51 No comments: Links to this post

Islamic Government about to murder young mother for being a Christian - that's after they have flogged her - all highly approved of course by Allah, the god of Islam

[When reading the following, just reflect how many similar cases there may be that we never hear about because a) the victims apostatise, b) they do not have American husbands, or c) the western media is preoccupied with what Putin thinks of homosexuals (which doesn't include, as far as I'm aware, either flogging or murdering them). Since this article was first written, the Sudanese government, bowing to international pressure, have intimated that Mrs Ishag may be released soon, but that in my books doesn't get them off the hook: what sort of sociopaths leave a young pregnant woman, who has done absolutely nothing wrong, languishing in a Sudanese hell-hole of a jail under sentence of death and a lashing in the first place? And what sort sick nut would want to embrace or remain in a religion that encourages and facilitates such barbarism in the twenty-first century? - ED]

I was wondering if you have heard the story about the 27 year old Christian woman in Sudan being persecuted for being a Christian?  Her husband has dual citizenship and lives in New Hampshire and is fighting to save his wife's life. She is in prison 8 months pregnant, along with her 18 month old baby boy. As soon as she has this baby she is sentenced to 100 lashes and hanging. My hope is that since her husband is an American, something can be done.

Please let’s spread the word to pray for this dear, brave woman. As a mother of 9 children, I am just heartsick over this. We are praying to St. Philomena. Thank you, Mr. Matt. - Gwen Marbach from Pa

Indeed we have. Meriam Yehya Ibrahim Ishag is a Sudanese woman who was born to a Muslim father but was raised by her Christian mother after her father abandoned the family when she was a child. She was never a Muslim, but rather embraced the faith of her mother, an Orthodox Christian from Ethiopia.

The really powerful aspect to this story, however, is that Meriam is at this moment preparing herself for martyrdom. After marrying a Christian, Daniel Wani, a Sudanese immigrant with U.S. citizenship, Meriam was sentenced to 100 lashes for adultery since a court ruled that her marriage to a Christian violated Sudan’s Islamic law. After her conviction, the 27-year-old was given three days to deny her Christian faith. She refused. Let me repeat that: SHE REFUSED!

She, her unborn baby and her 20-month-old son are currently in prison awaiting the execution, which is scheduled to take place sometime after Meriam gives birth to the baby.

The international community is rightfully outraged, and a great deal of pressure is being applied to force the government of Sudan to spare Meriam and her children. In the meantime, this heroic woman presents a shining example to the whole world on how to live the Christian faith … even when asked to die for it.

Remnant readers are encouraged to join the worldwide effort to save Meriam.

Michael J. Matt
Posted by grahammoorhouse at 13:10 No comments: Links to this post 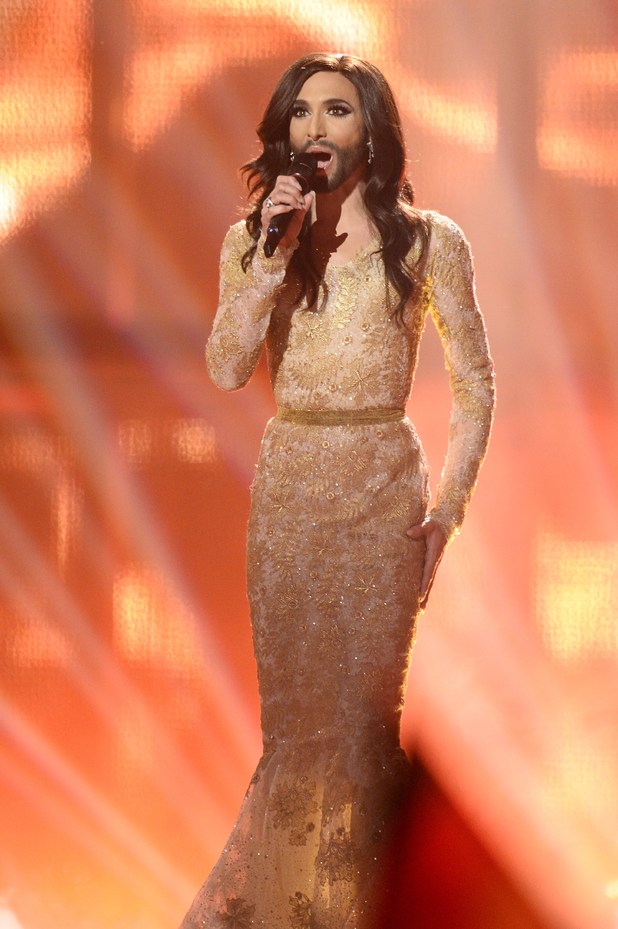 The modernists is a duplicitous sort who for the most part prefers life in the shadows. However, his vanity is such, that every so often he cannot resist the urge to break cover and do a little what-a-clever-fellow-am-I dance before slinking back into the shadows.

I not too certain why the above thoughts sprang to mind while reading a letter from one Fr Julian Shurgold (I believe, the parish priest of Holy Family, Sutton, Surrey) in the Catholic Herald (23/05/2014) concerning the Eurovision "song" contest:

" ... I'm certain Conchita got votes solely because she [SIC] was a bearded drag queen. Yet her victory was a well deserved black eye for Putin, certain members of the Russian Orthodox Church and other vile, bullying Russian homophobes. Apparently many leading Russians were seriously upset by Conchita. Well, it all goes to show that there may be justice in the world after all!"

It must come as an enormous consolation to the faithful to find that their clergy have the sort of scintillating minds that enables them to put together such brilliant and incisive letter at the drop of a hat. Nevertheless, whilst I'm no bag carrier for Putin, he doesn't actually strike me as the sort of man who would be throwing in the towel on account of a black eye ... or two for that matter.

However, correct me if I'm wrong, but all that Putin has done on the homosexual front is to outlaw homosexuals promoting their lifestyle (more accurately "death style") to minors. This is analogous to the British government criminalising the promotion of smoking to minors. And given that the average homosexual dies considerably younger than your average chain-smoker, it would seem neither an entirely irrational measure nor an entirely uncaring one.

Indeed, given the number of young people whose lives have been appallingly blighted by the sexual abuse of some Catholic clergy, and given the fact that over ninety percent of the victims of this abuse have been adolescent boys, it would seem a shame that the popes have not taken a leaf out of Putin's book and done more to clip the wings of the predatory sodomites among the clergy and prelates - ten's of thousands of young people would been spared unspeakable suffering had the popes had the Christian decency and courage to have done so.

Instead, the laity have had to sit back and watch popes like the late "Saint" JP2 the "Great" rewarding the likes of Cardinal Law, a depraved serial protector of rapacious sodomites among the clergy, with plum jobs - all wages paid of course from the widow's mite.

I suspect what really pisses father off is the fact that the Russian appear not to have brought the propaganda lie, which is churned out ad nauseum by the militant homofascist collective, and the godless media, to the effect that homosexuals are born that way . There is nothing quite so guaranteed to have a liberal, lefty, Modernist (its all the same) spitting blood than a refusal to be buy their propaganda - they seem to take it as very personal.
Posted by grahammoorhouse at 16:13 No comments: