"The Devil was always a liar" - We did take the Champs Elysees! But we did so peacefully! 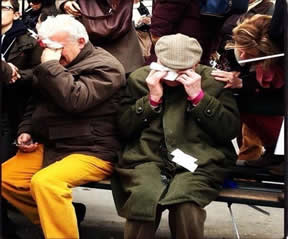 On Sunday the 24 March 2013, what was possibly the largest demonstration in French history took over the centre of Paris to protest against gay "marriage" and adoption. The secularists responded by ordering a news blackout and sending their police to tear-gas women and children and the elderly. The German Nazi Party was also conceived in the bowels of militant sodomites, and famously used similar methods to deal with peaceful opposition. The pictures show your typical enemies of the state after having been tear-gassed  An English friend who lives in France, filed the following report: 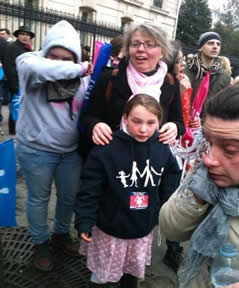 Thanks for the regular news bulletins from the UK. I've not heard how it went in Trafalgar Square, but I can tell you the "disinformation machine" in France has been working overtime again.

As in January, there were well over 1 million people on the streets of Paris yesterday. If you know the place, imagine the stretch of wide avenue leading off from the Arc de Triomphe (avenue de la Grande Armée), reaching the very large Porte Maillot (location of the Palais des Congrès and the landmark hotel tower la Concorde), continuing over the Périphérique into Neuilly-sur-Seine all the way along to La Défense (the towering business quarter on the west of Paris). Protesters were also stretched along the "Esplanade de la Défense" towards the "Grande Arche de la Défense". So, look it up on a map, picture it if you've ever been there, and then look at the official figures given by the Interior Ministry of 300.000 people (less than the figure they gave in Jan of 340.000 !!!). You can laugh or cry.

Then, pause. Because that was not the full size of it. Because of the numbers, the protesters also filled the several "back-up" avenues including avenue Foch which leads on to the place de l'Etoile (arc de Triomphe). This avenue was also absolutely packed. People were arriving from all sides.

So, the space officially allocated was too small, tensions rising, and the determination to be heard, growing. Added to this, the disdain with which the government has treated this debate since the start had brought many many people to boiling point. Although the main cordon of the demonstration was relatively calm with frequent messages from organisers to remain calm and peaceful, people had had enough. And for all those outside of the official zone, there was much frustration.

The Prefet de Police had refused the organisers' request to occupy the Champs Elysées. Manuel Valls, Interior Minister, had only days before the demonstration also retracted permission to occupy half of the Place de l'Etoile (arc de Triomphe roundabout from which the Champs Elysées depart) with a sniding remark that the organisers "...just go and demonstrate from Corbeil to Evry, you're not having the Etoile. I decide !" (Corbeil and Evry are insignifcant minor towns in the "banlieus" of Paris).

In the weeks and days leading up to the demonstration, the media had applied a blanket blackout. NOT ONE WORD on the upcoming momentous rally. Fortunately we now have the Internet. Since January, protesters have been posting photographs of banners stretching across motorway bridges ALL OVER the country, every trip by President Hollande and his ministers has been interrupted by hecklers. At a recent Book Fair, 2 protesters presented the President (divorced from Ségolène Royal with whom he has 4 children, and currently "living" with a companion with whom he is neither married nor even civilly-contracted but who lives the merry life on tax-payers money) with 2 books : "Marriage for Dummies" and "Demonstrations for Dummies".

Back to the day. The pressure was mounting (space too small, so many people, frustrations). The police at the Etoile were heavily outnumbered. The huge swathe of people was pushing and pushing amidst shouts of "We want the Champs Elysées". The police started to panic. Tear gas was fired into the crowd and against the first rows to push them back. And here it is important to counter the downright lies of the Interior Ministry who dared to say that extremists had been involved. The primary victims of the gas were parents and children, and the elderly. It was a diabolical reaction by the police authorities.

As it turned out the gas attack was probably the trigger for the subsequent events. News of the police actions reached the main cortège of demonstrators very quickly via mobile phone. I was myself with my family on the avenue of the Grande Armée, some 200 yards from the podium. I received the news from a friend who had been separated from his wife who had herself been victim of the gas. That was our cue. We made our way through the crowds and in fact it was relatively easy to travel around the Etoile in a large enough circle avoiding all the police barricades. At this point, there had a begun a steady but constant and very calm flow of demonstrators from all the overflows towards the Champs Elysées.

Now, whether the incomptent authorities had really believed their own jibes prior to the event when they said they were expecting only 100.000 people, or whether they were actually encouraging scuffles to take place is unknown. The father of a 14-year old who had to have artificial respiration administered for 1/2 an hour following the tear gas, spoke with a frank police officer. Here's what he said:

"We're not used to this kind of demonstration. When you park too many people in an inadequately-sized space, it's obvious that there will be overspill and scuffles. They'll say there's 10.000 of you but in truth there's more than a million people here. We know it, they know it. It's a damn shambles throughout the gendarmerie and the police ; we're managed by amateurs".

As the main show continued on one side of the Arc de Triomphe, steadily a flow of demonstrators was making it's way around the Etoile through the smaller axes, and towards the Champs Elysées. The Champs had been blocked at the Etoile by a barrage of HUNDREDS of police with their vehicles but it was remarkably easy to simply walk around and reach the famous Parisian avenue. The crowds on the Champs Elysées grew. And with every new wave of arrivals cheered on by those flag-wavers already there, more and more people filled it. By 5pm, the Champs Elysées was FULL on 2/3 of it's length with THOUSANDS of demonstrators. The police were at that point completely submerged and protesters even began a sit-in on the tarmac preventing some CRS (anti-riot police) minivans from departing the scene.

The crowds were jubilant and perfectly well-behaved. The chants here, were however more determined and political : "Hollande, démission". The Marseillaise was sung many times.
As word spread more and more people spilled onto the "plus belle avenue du monde". The media speak of 10s of people. Don't believe them. There are some AFP photos which prove that the Champs Elysées was swamped with people, no traffic passing, all the way from the Etoile, right down to the Franklin Roosevelt roundabout which leads off to the Elysée Palace.
Eventually, having occupied the terrain for over 2 hours, people started to gather at the lower end of the avenue chanting "Apéro chez François" (apéritif at François')!

People generally dispersed around 6:30pm but a few hundred stayed on. Some even set up their tents here, trying to start up a "French Spring" movement but it didn't last long before the CRS finally moved everyone on at 8:30pm.

The official organisers have "condemned" any scuffles that may have happened and the overflow into the Champs Elysées (despite this being practically blacked-out by the media).  It's sad to say, but the only way to grab the attention of the media and the government is when it "gets out of hand".

This will not be the last of it... If you want REAL information, visit www.lesalonbeige.blogs.com It's full of photos, videos and the TRUE story on lots of news items.

Posted by grahammoorhouse at 13:06 No comments: